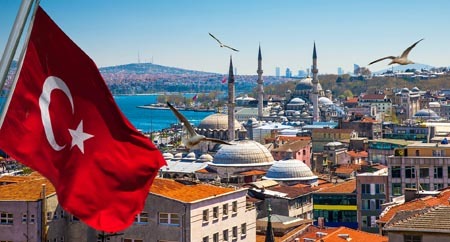 It is a tourist destination and also an expat destination thanks to its cultural and historical heritage, booming economy, clement weather, low living cost and others. It has plenty of things to offer its residents. Here are some of the things that you should do and see during your stay or visit. Take a short break from planning your shipping to Turkey and check some best attractions and things to do in Turkey.

The Gallipoli Peninsula is one of the tourists locations that you should. Take time to explore the Gallipoli Peninsula. You should also visit important sights, memorials, wars cemeteries and other attractions. Guided tours are provided to some of these places of interest. If you are a beach enthusiast, there are remote beaches nearby. It is also blessed with trenches, ridges, valleys and tunnels. The trenches and tunnels are worth visiting as many lives are lost there. From here, you can also visit Istanbul, which is one of the most historically important places in that area. It is the site for famous Constantinople.

One of the most dazzling tourist attractions is the Whirling Dervishes. One of the aged long ceremonies that you will get the opportunity of witnessing if you visit this location is Sema which is a whirling dance performed by the members of the Mevlevi Order. This dance originated in Konya, so it is the best place to enjoy the show. However, it is also performed in Istanbul in a number of shows.

A place that many expats know about even before they come is Istanbul. Some people are even thinking that Istanbul is the capital. But Istanbul is not the only beautiful place. Ankara, the real capital city is also quite impressive and beautiful and definitely worth exploring. There are a lot of impressive museums. If you want to know the history of the region, you should visit the Museum of Anatolian Civilisations but if you are interested in the culture of the people, you should visit the Ethnographic Museum.

Explore the Black Sea in a Cruise

A cruise on the Black Sea one of the wonderful means through which you can explore the northern suburbs of Istanbul. There are villages that stretch up to the mouth of the Black Sea which you can visit using a ferry-boat. There are two small Black Sea coast towns which you will be able to explore if you want a more quiet and relaxing moment. The towns of Unye and Giresun are cooler, greener and are less crowded than the towns of the Mediterranean Coast. Visiting these towns are veritable means of escaping the noisy environment of the urban areas.

Exploring the beaches of Bodrum

Any person interested in the ancient history should have heard of the Seven Wonders of the Ancient World. Mausoleum of Mausolus which is one of them is homed in Bodrum which is located in the south-west. Bodrum offers impressive nightlife, dining and shopping opportunities. One of the wonderful architectures of historical importance in this location is the Castle of St. John. Besides these, it has sandy beaches where you will be able to sunbath and relax under the sun. But bear in mind that the sun can be harsh during certain months of the summer period and sunbathing is not advisable during these months unless you are used to it.

Caving and finding a good bargain in Sanliurfa

If you are a Christian or a Muslim, you should have heard of Abraham, a respected religious figures in both religions. The story of Abraham appeared in both the Bible and the Qur'an. The cave where this great religious figure was born is located in a cave in Sanliurfa close to the Syrian border. The exploration this cave is not the only thing to be done in this location. You can also make out time to experience the bazaar in Sanliurfa.

If you like getting refreshed and revitalised during a water therapy, the pools at Pamukkale which is located close to Denizli should be a must visit location for you. Many tourists from different parts of the world come to these pools to bathe. The warm waters of the pools as it is believed have some healing effect. When you are done in the waters, you can explore the ruins of Hierapolis which are located nearby. Both the ruins and the waters have been included in the list of the UNESCO World Heritage Site.

There are Kackar mountains in the north-eastern part. It is located near the border with Georgia. The mountain range is a nice location to hike or trek. There are dense pine forests with trails and scenic pastures where you can trek starting from the bottom to the top most part of the mountain if you can. The heights are about 4000m high. However, the higher altitudes of the mountain is snowy during the winter season and so, the routes that lead to it is not opened when it is covered with snow except for trekkers that have the necessary gear suitable for snowy weather. But during the summer period, it is opened for all trekkers.

Cappadocia is a must visit location for tourists or people that are interested in geological and geographical deposits and formations. The landscape was the outcome of the eruption of Mount Erciyes many years in the past. It is nature that built this unmatched landscape of rock cones, gaping ravines and sprawling pinnacles. But the landscape was discovered by the humans after many years from the time it was formed. For many years now, it has become a wonderful tourist destination. There are underground tunnels as well as cave houses to explore. You can also go for a hot-air balloon rides over the area if you are done with the exploration of the caves and underground tunnels.

It has different kinds of water tanks including the ocean and rivers. Thus, there are plenty of water activities that you can engage. White water rafting is one of the things that you can do during your stay. Popular venues for it are the Coruh River, Koprulu River, the Dalaman River and the Zamanti River. Each of these rivers provides a great water-rafting environment with the Coruh River being one of the world's most rated destinations for water rafting.

The town of Antalya which is located in the southern coast is the right location to visit. This town which sits on the Mediterranean is not as popular as some other locations such as Istanbul but it is among the most frequently visited places across the globe. It has plenty of beaches which provide great environment for beach lovers and water sports. But if you don't want to go to the beaches, there are other things that you can do. Antalya has impressive nightlife. If you are a fun lover, you will enjoy yourself as much as you like during your stay here. You can also explore its stunning old town. It has an Archaeological Museum in case you are interested in archaeological discoveries. Other nice sights to behold are the Hadrian's Gate and its harbour.

Lake Van is one of the most wonderful lakes that you should visit if you are staying nearby Van. You can explore the lake on a boat. Your exploration of the lake will not be complete if you don't make out time to visit the Armenian church on Akdamar island which was constructed in the 10th century. It is well known for its intricate stone reliefs showing biblical scenes.

Mountain Ararat is located in the eastern part. The top of the mountain is snowy and this makes for great sight if you view it from afar. The mount can only be scaled by trekking companies that have the licence or authorization to do so. You can join in a tour to this mountain in order to enjoy an impressive view from the highest of this mountain.

Praying with the Orthodox Monks at the Sumela Monastery

The Orthodox Sumerla Monastery was constructed in the 14th century and it was one of the Greek settlements in Anatolia that survive till today. The monastery covers 54 km from Trabzon. It provides an incredible sight with an awesome interior embellished with magnificent frescoes. The monastery is founded on a cliff of 300m.

Prince's Island on a ferry

The Prince's Island is one of the islands that you must visit if you like sailing. There are ferry services to this island. The ferry services start from Eminonu dock. The island is a popular getaway for the locals of Istanbul. You will be surprised that there are no cars in the island. The preferred or commonest means of transportation are bicycles and horse-drawn carriages. Before you head to this location, you may first relax in a cafe located beneath in the Galata Bridge of Istanbul and sample a local tea or smoke the shish.

It is known for the hiking opportunities that it provides hiking enthusiasts. Some routes are crowded while some are not. The Lycian Way is one of the uncrowded routes. The route is very beautiful and it spans 500km between Fethiye and Antalya. If you are a hiking enthusiast, you will have enough of it in this location. You can take up to a month to hike through this route as you explore its impressive scenery.

Istanbul is one of the most popular historical cities in the world. It was as popular as Rome in those days. It was the capital city of Byzantium which is the greatest empire in the Middle Ages during the Christian Era. Definitely, you may have heard about Constantinople. Since it was conquered by the Ottoman in the 15th century, it has remained Islamic and its name was changed to Istanbul. Istanbul has rich historical and cultural heritage. The highlights of architecture are the Topkapi Palace, the Blue Mosque and the Hagia Sophie.

Your visit and exploration of this country will be found wanting if you fail to experience the traditional Turkish bath. The locals go to the bath in order to scrub and massage themselves to get the nerve working very efficiently. There are a lot of baths, but the most popular ones are the Galatasaray Hamman which is located in Beyoglu and the Cagaloglu Hamman in Sultanahmet. There are other unpopular baths that you can also visit.

The Ruins of Ephesus

Ephesus is a word that every good Christian should be conversant with as it is one of the cities that St. Paul wrote to. Many pilgrims are coming here in order to view some of the best and biggest Roman ruins located outside of Italy. There are plenty of historical and cultural heritage in this ancient venue. The Greek Temple of Artemis which is among the seven wonders of the Greeks. It is believed that the Blessed Virgin Mary, the Mother Jesus Christ spent the remaining part of its life in this location. There are other places to visit such as the awesome beachside port of Kusadasi, the Greek isle of Samos and others.

Reasons to move to Turkey